OMG that final episode was perfection. I can’t believe the show is over, it feels so surreal. I became so emotionally invested in this series and I could not be happier with the final episode. It was everything I had hoped for! Now, because I still have Breaking Bad on the brain I can’t think of content for this weeks B.A.D. girl tip! So instead I am going to share 10 things that I loved about the final episode of the best show on TV.

10. Walt’s one hit to the car window to remove the snow fall was so badass.

9. The shot of Walt hiding in the dark outside of the Schwartz mansion.

8. Realizing the two best hit men in town were Badger and Skinny Pete with lasers.

6. The entire conversation between Walt and Skyler in the Kitchen. It was so GOOD.

4. The scene where Walt and Jesse come face to face and you hear Jack going on about what a great “partner” Jesse was. I think hearing that and seeing the pain in Jesse’s face is what led Walt to save him.

2.  The final scene between Walt and Jesse. It was tragic and beautiful all at the same time.

1. Jesse breaking Free!! Walt dying at peace and on his own terms with his beloved equipment. It was the perfect place for him to die. The attention to details in the writing of this show is just SO. DAMN. GOOD. I watched the episode twice last night because I always need to watch Breaking Bad episodes twice to catch things I may have missed while suffering from anxiety attacks during the first viewing. It’s been a crazy ride and I am happy I got on board (thanks to EJ, Kim and Joseph who all talked me into the show).

So I am thinking this weeks B.A.D. Girl tip should be for those of you who didn’t watch the show yet to get yourself a Netflix account and dive in!! Sorry not sorry for spoilers, you should have been watching!! 😉

Did you watch the Finale? Thoughts?

Shop My Site & Join The Movement! 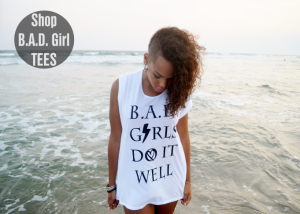 Meet Nicole, the creator of Style Me B.A.D. and the B.A.D. Girl Movement!

What I Blog about